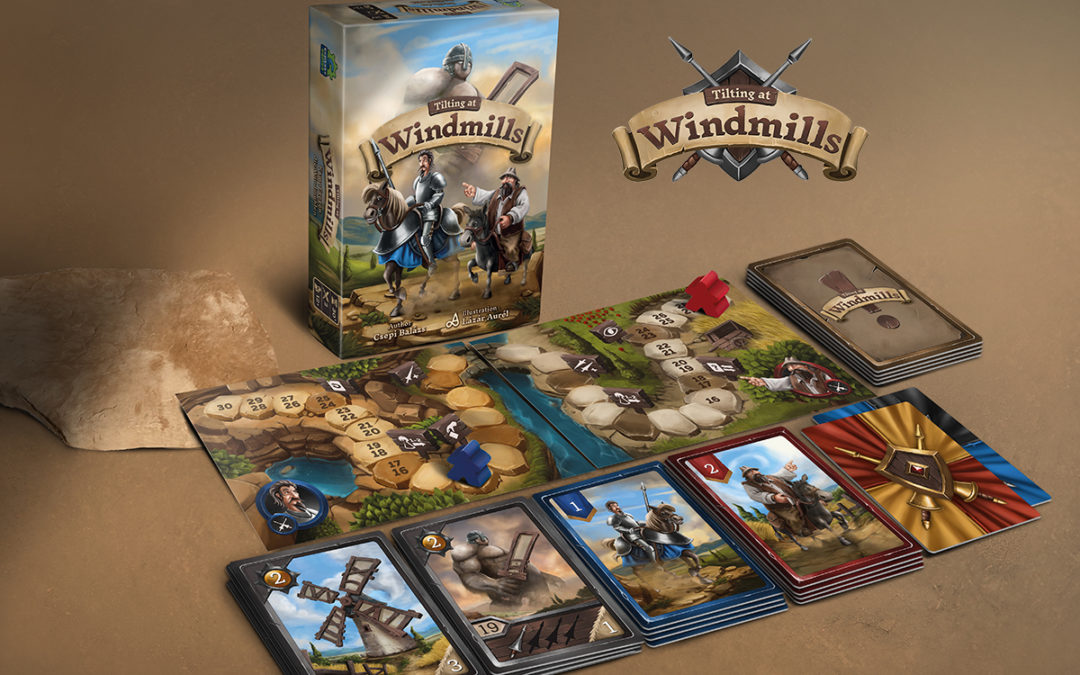 “A knight and his faithful sidekick amble on a dirty, empty road. The scorching sun blurs the boundaries of land and sky at the horizon. Only the choir of crickets breaks the tedious silence between the two travelers. The knight looks up and sights something in the distance. A gleam in his eyes appears from excitement. – Another giant! Quickly, my lance! – yells at his faithful companion. – But my good sir, it’s only a windmill! – blinks the stumpy man towards the distant silhouette.” Tilting at Windmils is a two-player game in which players control Don Quixote and Sancho Panza. The two characters move towards each other on the playing board. Players use movement cards to move either the knight or his companion. One round lasts until the two characters meet on the road. At the end of each round, a player gets a windmill/giant card with a victory point on it. There are two ways of winning the game. Either you collect more points than your opponent, or you force them to break all their lances; a player loses lances if they acquire a card with its giant side. The key tactic for this game is to force encounters at the right place and in the right time by adding up movement cards. Game rules can be downloaded from Board Game Geek in 5 languages: English, German, French, Spanish and Hungarian https://boardgamegeek.com/boardgame/231331/tilting-windmills/files Look for our booth at SPIEL’17 in Essen from 26th Oct until 29th Oct. Cogitate Games booth: HALL 7 L-103 —————————————————————— We always welcome resellers and distributors. If you have a shop ask for distributor conditions. If you are an end customer we have two recommendations for you: 1. Due to the high shipping cost we recommend you to find friends and order more than 1 copies from us 2. Convince a shop near you to become our reseller or distributor For further details contact Peter hello_at_cogitategames.com (ENG)